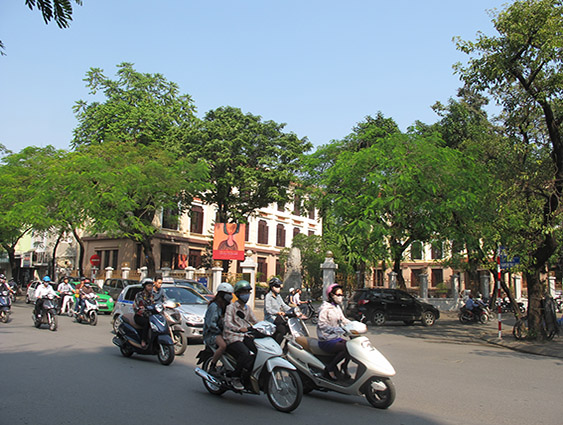 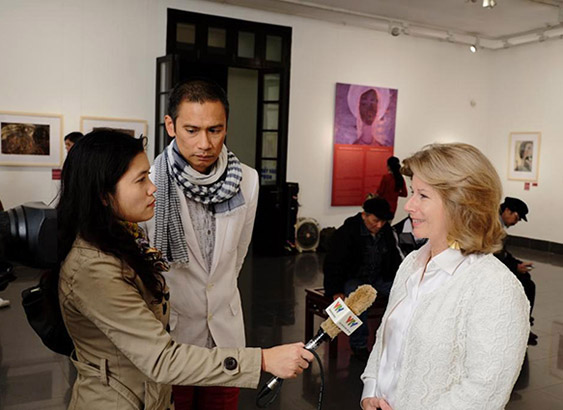 Tran Trung Tin: The Optimistic Tragedy opened at the Vietnam Fine Arts Museum in Hanoi, the first retrospective of the works of Vietnam’s greatest expressionist artist. A documentary film of the artist’s works and life appeared on national television. Galerist extraordinaire Suzanne Lecht, artists Pham Cam Thuong, Marita Nurmi and Georges Burchett as well as celebrated writer Duong Tuong attended the opening. The exhibition of one hundred works on newspaper and photographic paper was hosted by Tran Thi Nguyen Nga, widow of the artist, curated by Sherry Buchanan and realized by Nam Nguyen.

Considered the father of modernism in Vietnam, Tran Trung Tin (1933-2008), who was born in the Mekong Delta, lived in Hanoi during the war where he painted on newspaper and homemade canvases between 1969 and 1975. While his works on paper survived, all his wartime canvases were lost, burnt after the war for cooking and heating fuel. After 1975, he returned south and continued to paint on photographic paper and later on canvas. This was the first retrospective of his work in the very city where he painted the ‘optimistic tragedy’ of war. The exhibition will be travelling to other venues. Stay tuned…

Hanoi Grapevine
‘A remarkable exhibition of paintings not exhibited previously in Vietnam, by the highly respected late artist Tran Trung Tin (1933 -2008), The Optimistic Tragedy, is now on view at the Vietnam Fine Arts Museum. Exceptionally well presented, these exquisite paintings embrace the viewer’s gaze with their gentle tenderness of feeling, color and form, but offer no sentimentality, because they convey a sense of peace, attained in the midst of war and psychological terror.’ Ilza Burchett, ‘About the Paintings of Tran Trung Tin,’ hanoigrapevine.com, 24 October 2013
READ MORE

Than Nienh News
‘The first retrospective of unique pictorial creations by late painter Tran Trung Tin (1933– 2008) will be held at the Vietnam Fine Arts Museum in Hanoi October 18 – 30. Said to be Vietnam’s greatest expressionist artist, Tin’s works done during the Vietnam War (1964–1975) capture the sorrow of people caught up in one of the most tragic conflicts of the twentieth century.

Born in the Mekong Delta, Tin joined the resistance against the French forces at the age of twelve and fought on the Cambodian front. At the end of the First Indochina War between France and the Viet Minh in 1954, Tin worked as a film actor and scriptwriter but he turned to painting later after becoming a best friend of famous painter Bui Xuan Phai.

According to the Museum, ‘Tin’s images of girl soldiers with guns and flowers, broken buildings and broken lives are balanced by tender depictions of lovers, mothers and spiritual renegades. His cityscapes and abstracts are meditative retreats of loosely painted blocks in warm colours, a self-created visual sanctuary from the war raging outside.’

Major exhibitions of his works have been held around the world including solo exhibitions at the Singapore Art Museum in Singapore and the British Museum in London. The Vietnam Fine Arts Museum is located at 66 Nguyen Thai Hoc Street, Hanoi. ‘Hanoi hosts retrospective on expressionist artist,’ thanhniennews.com, 5 October 2013
READ MORE