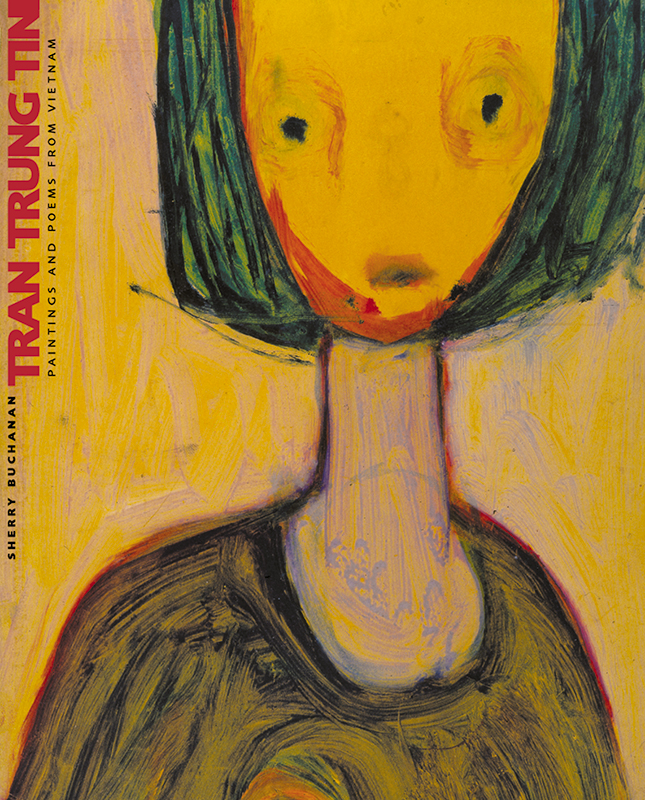 Paintings and Poems from Vietnam

Tran Trung Tin painted in Hanoi during the 1960s and 70s, conveying the experience of the Vietnamese at war and the essence of human emotion in his images. When he was 12, he joined the Resistance against the French who occupied Vietnam, devoting his youth to freeing his country only to be disappointed by the repression and misery that followed. Living in Hanoi during the Vietnam War, forbidden to express himself in words, he turned to painting to communicate the contradictions of his time.

‘A simply and beautifully designed book.’

‘Among modern and contemporary Vietnamese artists Tran Trung Tin is indeed one of the most exceptional and venerated.Tin’s art represents a singular vision that possesses a fierce energy and a raw emotion that are uncommon in recent Vietnamese art. In today’s freer, more open Vietnam, Tin’s life has been a moving example to many of the nation’s recent generation of artists. Sherry Buchanan, the author of the first monograph on Tin’s work, takes a personal look at the artist’s life and times in this remarkable book.’
Ian Findlay-Brown, ‘The Triumph of Art,’ Asian Art News, August 2002

‘A remarkable exhibition of paintings not exhibited previously in Vietnam, by the highly respected late artist Tran Trung Tin (1933 -2008), The Optimistic Tragedy, is now on view at the Vietnam Fine Arts Museum,’ Ilsa Burchett about the paintings of Tran Trung Tin, hanoigrapvine.com, 24 October 2013

‘Tran Trung Tin (1933 — 2008) is Vietnam’s greatest artist. Over a million women served in North Vietnam’s militia, and Tran Trung Tin depicted them all. On the eve of a UK show at the British Museum accompanied by the first monograph of is work, he tells Sherry Buchanan how he kept his anti-war portraits from the authorities and why more than thirty years on, his paintings still have the power to shock.’ Sherry Buchanan, ‘Vietnam’s Silent Warrior,’ The Independent, 9 June 2002

‘This is a simply and beautifully designed book by Sherry Buchanan. Tin’s work, in its simples forms and translucent washes, quiet religiosity and compassion for the outcast, brings to mind the paintings of Rouault. His abstract work is the most powerful meditative retreats of loosely painted blocks in warm colours, a self-created visual sanctuary from the war raging outside.’ Modern Painters, 2002

‘Tran Trung Tin (1933 — 2008) is a Vietnamese artist of the war generation who worked entirely independently of official circles. He began as a successful young actor, but was sufficiently upset by the war and its effects, in a human rather than a political way, that he was compelled to start putting his distress down in images on paper. It’s impossible to know how aware he was at the time of the pre-First World War German Expressionists, but these often brilliantly coloured, tortured images seem to drop us straight back into the world of Heckel and Kirchner.’
John Russell Taylor, ‘Making a quieter splash,’ The Times, 8 June 2002

‘A life of fighting, enforced occupation and unprecedented bombing awaited Tran Trung Tin (1933 — 2009) when he was born under French colonial rule in Vietnam in 1933. [The book and exhibition offer] a timeline of the country’s twentieth century travails alongside Tin’s own anni horribil—his milestones and rites of passage—charting his stint as a boy soldier in the North Vietnamese People’s Army at 13 and his brief success as an actor. By the time JFK was assassinated and the US-Vietnam war was over in 1975, Tin had painted over 1,000 pictures. Surprisingly, none of them are bleeding-heart portrayals of suffering or the kind of cloying Communist propaganda found in official war art. Instead, his images are a lonely, internal journey through times of adversity. There is no celebration or bitterness, only gentle ambivalence in his ghoulishly masked figures. One faceless woman clutches a gun and cocks her head to smell a flower, while a hunched mother carries her child off into the jungle resilient but resigned.

Tin’s palette is informed by the muddy half-light of Viet Cong tunnels or the gloom of a blacked-out city. This sort of bleakly existential interrogation of battle is also found in post-war European war by Dubuffet or Giacometti but is rarely acknowledged in evaluations of Vietnamese culture, partly because American movies have long stereotyped their adversaries as plucky but inarticulate scrappers, never as foppish, sensitive objectors.’