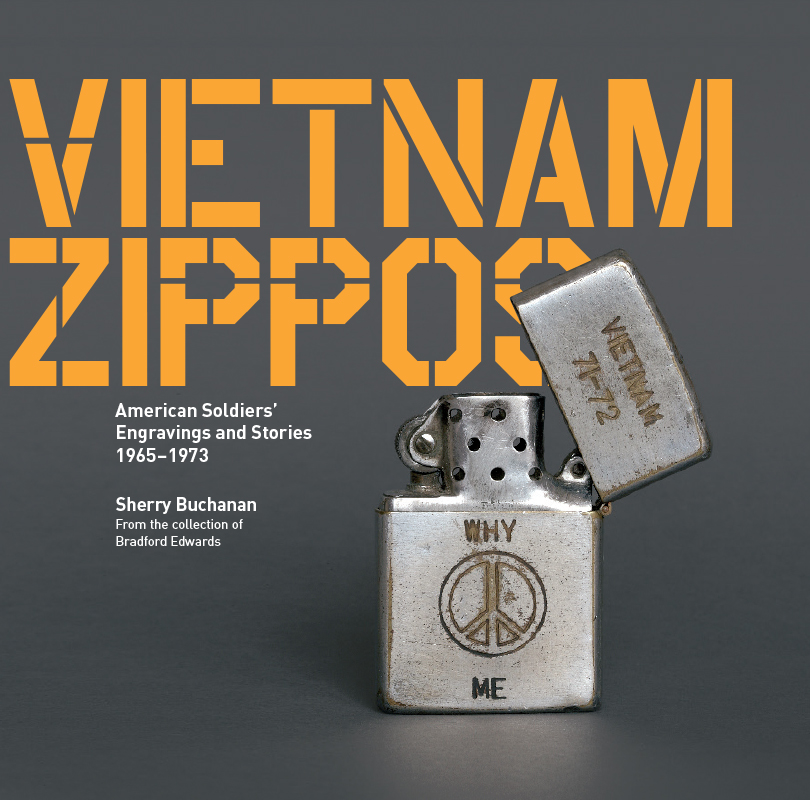 Bradford Edwards is an American artist and collector of Vietnam Zippos.

Misha Anikst is an award-winning designer and photographer.

This stunning award-winning book showcases for the first time the personalized Zippo engravings by American soldiers made during the Vietnam War (1964—1973). In a real-life version of the psychedelic war portrayed in Francis Ford Coppola’s Apocalypse Now, Sherry Buchanan tells the fascinating story of how the humble Zippo became a talisman and companion for American GIs during their tours of duty. Drawn from the collection of American artist Bradford Edwards and other private collections, the chrome-plated brass bears witness to the uncensored feelings of young men at war; their testimony is shocking, hilarious and poignant in its bitter satire. Soldiers engraved love, death, sex, drugs and rock’n’roll onto the canvases of their Zippo lighters, in a real-life version of the war portrayed in Francis Ford Coppola’s epic film Apocalypse Now. Of the thousands of documents on the Vietnam War, none is so raw, so immediate and so resonant today. Through a dazzling array of images, we see how Zippo lighters were used during the war, and we discover how they served as a canvas for personal and political expression during the Age of Aquarius, engraved with etchings of peace signs and marijuana leaves and slogans steeped in all the rock lyrics, sound bites, combat slang, and antiwar mottos of the time.

In 1965, journalist Morley Safer followed the United States Marines on a search and destroy mission into Cam Ne. When the Marines he accompanied reached the village, they ordered the civilians there to evacuate their homes—grass huts whose thatched roofs they set ablaze with Zippo lighters. Safer’s report on the event soon aired on CBS and was among the first to paint a harrowing portrait of the War in Vietnam. LBJ responded to the segment furiously, accusing Safer of having “shat on the American flag.” For the first time since World War II, American boys in uniform had been portrayed as murderers instead of liberators. Our perception of the war—and the Zippo lighter—would never be the same.

‘Lavishly illustrated and startlingly frank, Vietnam Zippos: American Soldiers’ Engravings and Stories (1965-1973) is an insightful and gut-wrenching look into the thoughts of the young men who carried them.’

‘This book is highly recommended.’

‘Whether you choose to ponder the poignancy of the engravings or appreciate them as beautiful cultural artefacts, Vietnam Zippos deserves a place on your shelf.’

‘[Vietnam Zippos] documents what the author, Sherry Buchanan, calls ‘amulets and talismans bringing the keeper invulnerability, good luck and protection against evil.’ Sadly, these personalized mementos also served as last testaments for many who were killed in action…This book, well designed and photographed by Misha Anikst, offers a rare personal dimension. The mottoes on these lighters, like ‘When I die I will go to heaven because I spent my time in hell,’ provide candid insight into what these soldiers thought of the war.’
Steven Heller, Sunday Book Review, The New York Times, 2 December 2007, 27 March 2013

‘When pictures of thatched huts set ablaze by U.S. troops were beamed to stateside TVs, the Zippo lighter became a symbol of the escalating Vietnam War and America’s increasing uneasiness with her mission there. But the lighters were often much more than that to the soldiers; they were talismans and tokens of personal expression, engraved with statements ranging from the profane to the obscene to the just plain hopeful:

When God open[ed] the gates of hell, the 101st walked out
Death is my business and business has been good
If you think sex is exciting, try incoming
Never again
I love you mom

Lavishly illustrated and startlingly frank, Vietnam Zippos: American Soldiers’ Engravings and Stories (1965-1973) is an insightful and gut-wrenching look into the thoughts of the young men who carried them.’ The Significant Seven, Editor’s Favorites in Books, Amazon.com, September 2007

“Zippo is as distinctly American as apple pie, the Stars & Stripes and the girl next door. . . . Whether carried as a talisman or as simply a convenient, easily-concealable object upon which to privately ‘rage against the machine,’ these Vietnam Zippos represent a previously untapped source for studying the ‘new military history’ of those who fought our most divisive war. . . . This book is highly recommended.”

“Lavishly illustrated. . . .
A subgenre of battlefield art that has probably never been collected as thoroughly or presented as elegantly as in “Vietnam Zippos”. . . . [The lighters] tell hundreds of stories . . .and each one makes the book worth reading.”

‘Whether you choose to ponder the poignancy of the engravings or appreciate them as beautiful cultural artefacts, Vietnam Zippos deserves a place on your shelf.’

‘Still in Saigon…Sex, love messages, texts, poems : The soul of the American soldiers in Vietnam, forever etched on their lighters, are revealed in a new book. The point of this book? This is not a book about lighters. The engravings are testimonials, sometimes shocking, sometimes ironic, that reveal without any censorship, how the young soldiers felt about one of the most controversial conflicts of the twentieth century.’
Sibilla Morgantini, GQ Italy, February 2007

‘A new book reveals the most illuminating artifacts of the Vietnam War: American soldiers’ customized Zippo lighters.Much has already been said about the Vietnam War, but the messages engraved on Zippo lighters by American soldiers stationed there speak with such clarity that they deserve to be heard. ‘Give me head til I’m dead”, “Death is my business and business has been good.”; ‘When I die bury me face down so the whole world can kiss my ass”; and (in muted despair) ‘Never again” are just some of the slogans featured in the book Vietnam Zippos, a showcase of the many inscriptions made by American troops. These lighters, used to set Vietnamese villages alight, were instruments of death and destruction. But, for their American owners, they were also good luck charms; talismans marked with peace slogans, rock’n’roll wisdom, bits of satire, gung ho-isms, profanity and theology, and as such have become potent, shocking and at times bitterly funny documents of war.’
‘Flames of War,’ October 2007, GQ UK

‘For some they acted as a memento of loved ones at home: for others they were a recriminatory message to the generals who had sent them into a war that was proving impossible to win. Etched on their surfaces, figures of popular culture merged with images of the “enemy”, Ho Chi Minh. All of them were a statement of independence.

The Zippo has been synonymous with the American military ever since the company’s first lighter was produced in 1933.It was brought to prominence during the Second World War when the company’s entire production was directed to armynand navy stores. Such were their popularity at the time that the American war correspondent Ernie Pyle wrote: ‘I truly believe the Zippo lighter is the most coveted thing in the army.’ There was an explosion of personalised lighters during the Vietnam War, and it is these that are documented in a new book, Vietnam Zippos by Sherry Buchanan. Reluctant draftees, many still in their teens, could buy one for $1.80 and get them personalized on the engraving machines that lined the streets of Vietnam. Getting a Zippo marked was not unlike getting a tattoo—you could either bring along your own design or choose a template off the wall.

The slogans the soldiers chose ran from the jingoistic, to the religious, to the plainly offensive. One of the most popular phrases is a parody of the American propaganda of the day: “Give me your hearts and minds, or I will wreck your fucking huts.” Others show a map of Vietnam with its prominent bombing targets marked, or a reference to how many “Gooks” the owner has killed. Symbols of black power were also popular. Many soldiers were angry at the injustice of being told they were fighting for a country’s freedom while they faced racism both in the army and back in America. The Zippo was not just a tool for lighting your cigarette. Stories abound about lighters saving lives, by deflecting shrapnel, or acting as a beacon for a stranded troop. They were also instruments of death; soldiers used them to set fire to Vietnamese villages.

Buchanan believes the “Zippos provide a revealing insight into the conflict. “It is American history on a small metal canvas. Vietnam was so divisive, but most of the protests came from the US public. The statements on the lighters come from the soldiers themselves and speak volumes more than Jane Fonda or Joan Baez ever did.”

Veteran Zippo lighters are now highly collectible. There are an estimated four million collectors in the United States, and a tourist attraction built around the lighter — the Zippo/Case Visitors Centre—which is North Pennsylvania’s most visited museum. What is particularly moving about these lighters is that behind each one lies a story of a young man sent to war. The messages of defiance fail to mask Vietnam’s tragic legacy.’
Toby Green, ‘The Eternal Flames of Vietnam,’ The Independent, 2007

‘A fascinating and specialized military cultural history that is a unique and recommended contribution to the growing library of Vietnam War histories.’

‘Sobering . . .
Using Zippos from the collection of artist Bradford Edwards, Buchanan shows the personal histories of some of the millions who served [in Vietnam]. This unique approach is by turns funny, pornographic, informative and heartbreaking.’

‘The engravings on lighters featured in this copiously illustrated volume are at once searing, caustic, sentimental, humorous, but always moving, running the full emotional spectrum with both sardonic reflections and poignant maxims. Part pop art and part military artifact, they collectively capture the mood of the sixties and the darkest days of Vietnam.’

‘For American soldiers in Vietnam, the Zippo lighter was an essential talisman; its chrome casing was also a convenient canvas on which fighters expressed their anger and frustration. In Vietnam Zippos these unique artifacts tell the story of a war gone sour. Lyndon Johnson’s observation that ‘ultimate victory will depend upon the hearts and minds of the people’ inspired the gleeful savagery of ‘Give me your hearts and minds or I will wreck your fucking huts’; another solider rephrases Psalm 23 with ‘Yea though I walk through the valley of the jungle of death, I will fear no evil, for I am the evilest son of a bitch in the jungle.’ Later as enthusiasm for the war ebbed, lighters feature such deep thoughts as ‘When the power of love is as strong as the love of power, then there will be peace.’ Truer words were never engraved.’

‘During the Vietnam War, the Zippo lighter was an indispensable part of a GI uniform…At a time when American men and women are again fighting an unpopular war in a faraway land, it is fitting to remember the philosophers of that war who passionately reflected on their circumstances in this humble yet personal medium.’