On The Ho Chi Minh Trail 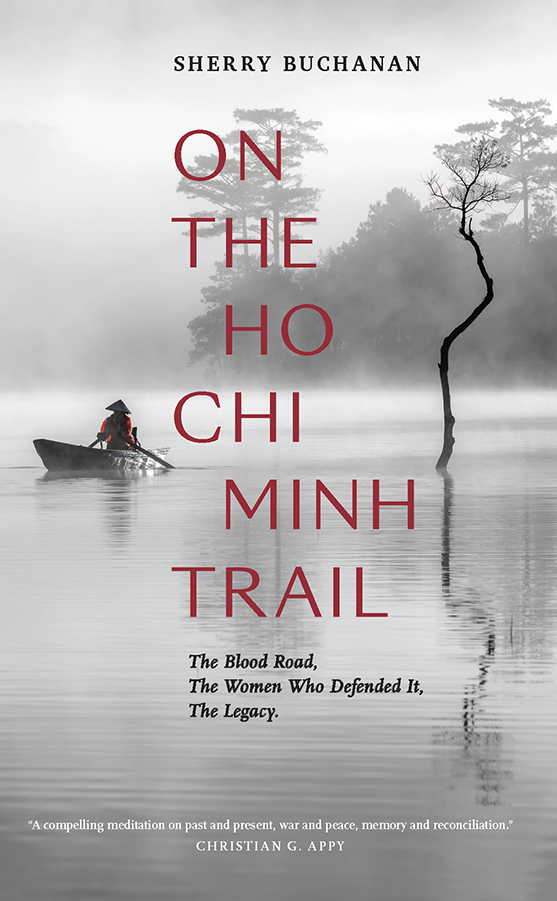 On The Ho Chi Minh Trail

The Blood Road, The Women Who Defended it, The Legacy

Sherry Buchanan is an author, editor and publisher. Before creating Asia Ink, she worked as an editor and columnist with The Wall Street Journal and the International Herald Tribune.

Hardcover with jacket
22.4 x 14.8 cm
280 pp
Illustrated in colour throughout with 47 Colours illustrations and 12 Maps
Printed in Italy by Graphicom on Munken Lynx Smooth 120 gsm

ON THE HO CHI MINH TRAIL: The Blood Road, The Women Who Defended It, The Legacy is a compelling alternative to common American narratives of the Vietnam War (1965–1975).  Far from the macho dystopian world portrayed in Francis Ford Coppola’s war film Apocalypse Now, Sherry Buchanan brings to light an unexplored aspect of the war: how women militia and soldiers defended the Ho Chi Minh Trail and played a strategic role in Hanoi’s victory against a superpower.

Excerpts from the Trail Commander’s memoir reveal logistical details of the Ho Chi Minh Trail hidden until now. The ten thousand mile network of military roads, bridges, and pipelines was built by the North to bring about the unification with South Vietnam promised in the 1954 Geneva Accords.

On her journey from Hanoi to Ho Chi Minh City, Buchanan encounters actors and participants from all sides of the frontline. Her storytelling brings the geo-political to the personal. The war’s toxic legacy is redeemed by stories of personal forgiveness, atonement, reconciliation, and friendship.

‘Sherry Buchanan takes us to a beautiful and haunted land where hundreds and thousands of young women and men risked their lives in a staggering effort to forge a route to national unification against the greatest military power on earth. Combining travelogue, history, interviews, art, and endless empathy, On the Ho Chi Minh Trail is a compelling meditation on the relationship between past and present, war and peace, memory and reconciliation’. Christian G. Appy, professor of history at the University of Massachusetts Amherst and author of Patriots: The Vietnam War Remembered From All Sides and American Reckoning: The Vietnam War And Our National Identity.

‘This is a fascinating account of the largely untold story of the courageous women who played a strategic role for the North by safeguarding the major supply route from North Vietnam to the combatants waging the war in the South. Sherry Buchanan provides new insights into the long conflict by illuminating the critical contributions of women who not only undertook a very dangerous mission in an extremely harsh environment, but also became a powerful force for reconciliation at the war’s end. We get to travel the Ho Chi Minh Trail with the author, becoming present-day witnesses to the compelling history of women who defended the Blood Road decades ago’.
Melanne Verveer, US Ambassador-at-large for Global Women’s Issues.

‘Sherry Buchanan takes us on the Ho Chi Minh Trail in a riveting and as relevant a journey today as it was fifty years ago. She charts new territory — especially in the vivid, often heartbreaking stories of women who fought in the war as teenagers and the forced roles of housewives who stood on rooftops to shoot down US planes that bombed their homes. Buchanan details — at times too much to absorb — the countless centuries of Vietnam’s perilous path to freedom. But her vibrant writing and crystal clear interviews with women — their youthful dreams and present day realities — shine a powerful light on a war and a previously unexplored dimension that should never be forgotten’. Myra McPherson, journalist and author of Long Time Passing: Vietnam and the Haunted Generation.

‘A riveting read of a hidden history. Sherry Buchanan reveals the untold story of the young women in Vietnamese war drawings who patriotically defended the Ho Chi Minh Trail during the Vietnam or American war. This book is essential reading for anyone wishing to understand Asian history from new perspectives’. Jessica Harrison-Hall, curator at the British Museum and author of Vietnam Behind the Lines: Images from the War, 1965—1975.