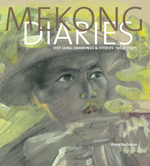 Nguyen Toan Thi is a war artist, former director of the Ho Chi Minh City Fine Arts Museum and the creator of the museum’s unique collection of war art.

Nam Nguyen is an independent scholar and collector of contemporary Vietnamese art.

Published by the University of Chicago Press 2008

Illustrated in colour throughout

Mekong Diaries: Vietcong Drawings and Stories (1964 -1975) presents never-before-published drawings, poems, letters, and oral histories by ten of the most celebrated self-described Viet Cong war artists. These guerrilla artists – some military officers and some civilians – lived clandestinely with the fighters, moving camp alongside them, going on reconnaissance missions, and carrying their sketchbooks, inks, and watercolors into combat. Trained by professors from the Hanoi Institute of Fine Arts who journeyed down the perilous Ho Chi Minh Trail to ensure a pictorial history of the war, they recorded battles and events from Operation Junction City to Khe Sanh to the Tet Offensive. They sketched as the spirit moved them, rendering breathtaking landscapes, hut and bunker interiors, activities at base camps, troops on the move, portraits for the families of fallen soldiers, and the unimaginable devastation that the conflict left in its wake. Their collective record is an extraordinary historical and artistic document of people at war. As such, it serves as a powerful response to the self-centeredness of American accounts of Vietnam, filling a profound gap in our national memory by taking us into the misunderstood worlds of those whom we once counted among our worst enemies.

‘A surprisingly gentle aspect to a notoriously brutal conflict’

‘A moving alternative to common American narratives of the war that offers extraordinary insight into Vietnamese hearts, military and civilian.’

‘A stunning look at some of the wartime art produced by the Vietnamese soldier-artists who served in the “American War” to drive out the U.S., topple the American-backed government in Saigon and reunite Vietnam.’

‘Amid the vast sufferings of the Vietnam War, the Viet Cong dispatched trained artists down the ‘Ho Chi Minh Trail’ into the heart of battle, to record the events in watercolours and drawings. Forty years on, Sherry Buchanan’s new book compiles their work, to reveal a surprisingly gentle aspect to a notoriously brutal conflict.‘

‘During the Vietnam war, America’s image of the conflict was shaped by news footage of battlefields dominated by miasmal jungle and of an enemy who was often portrayed as merciless and inhuman. But the war doesn’t look that way in the drawings, poems, letters and oral histories compiled in Mekong Diaries. Author Sherry Buchanan journeyed across Vietnam to gather previously unpublished material from 10 Vietnamese artists who resisted the U.S. The resulting volume is a moving alternative to common American narratives of the war and offers extraordinary insight into Vietnamese hearts, military and civilian.

About 100 artists served in the Mekong Delta during the 11-year conflict, tasked with recording battles and creating images that could be used to inspire civilians in the war effort. Sixty-two died in action. Some were regular soldiers as well as artists; others performed no military duties but chose to go on reconnaissance missions and into combat to create their works. Recruits were trained in drawing, and professors from the Hanoi College of Fine Arts traveled the Ho Chi Minh Trail to set up art courses in the Mekong Delta before dispatching their students into battle with sketchbooks, ink-bottles and paint palettes.

Many of the works — like Quach Phong’s memorable watercolors — capture ordinary acts of resistance by beleaguered fighters armed with unsophisticated weaponry. Phong’s Farmer with Gun (1966) portrays a leather-faced guerrilla pointing a rifle to the sky in a defiant attack on a fighter plane. “Even though he had little hope of shooting it down, there lay his strength,” recalls Phong. At other times, artists tried to depict the tense interludes between battle, documenting the interiors of their foxholes and bunkers. Some also painted furiously to preserve the landscape as it looked before the bombs and napalm. Nguyen Thanh Chau liked to capture the beauty of pink lotuses, malachite melaleuca trees and turquoise marshes under a lapis lazuli sky. “Whenever I saw a beautiful landscape, I forgot about the danger and stood up to draw,” he writes.

Artists devised ingenious ways to work while under fire. Hyunh Phuong Dong perfected the technique of squeezing clumps of paint straight onto paper and adding black outlines later, once he was out of harm’s way. “Their bombs cannot bury me,” he wrote in a letter to his wife from the Mekong Delta. “I can still work, paint, sing and write to you.” Another artist, Pham Thanh Tam, filled empty penicillin vials with paint, which he stored inside Russian-made 12-mm shell casings so that they wouldn’t break.

In a war that killed more than 3.8 million Vietnamese, many military artists came to see themselves as aestheticians of common life, offering a respite from the endless bloodshed. “Because war is too hard, it is the artist’s duty to create beauty,” says Pham Thanh Tam. “I wanted to convey uplifting, spiritual feelings and fragile emotions.” His delicate pencil sketch Carrying the Mail Down the Ho Chi Minh Trail (1968) captures an everyday tableau but poignantly so. In other pieces, iridescent young men and women in traditional dress perform the quotidian chores of transporting water and collecting wood.

Today, the Ho Chi Minh City Fine Arts Museum holds the largest collection of what is known in Vietnam as Liberation Art. The biggest buyers — perhaps unsurprisingly — are American Vietnam War veterans seeking the catharsis of art. Mekong Diaries provides just that, and testifies to the ultimate futility of armed conflict. “If we were all artists,” writes another featured painter, Nguyen Thu, “there would be no war.”

‘Sherry Buchanan’s new book, Mekong Diaries: Viet Cong Drawings & Stories, 1964-1975, gives us a stunning look at some of the wartime art produced by the Vietnamese soldier-artists who served in the “American War” to drive out the U.S., topple the American-backed government in Saigon and reunite Vietnam. The book’s title is a bit misleading. This is not a collection of diaries. There are a few scraps of moving wartime correspondence and some wartime poems by Nguyen Duy, but this is, primarily, a collection of watercolors and sketches created during the war by soldier-artists.

To provide some context for the images, Buchanan has included several introductory essays and reminiscences from each of the 10 featured artists. The essays are written by Buchanan, a former features editor at The Wall Street Journal who now works independently on Asian art and culture, and two of her collaborators—Nam Nguyen (a Vietnamese-American who left Vietnam as a refugee in 1975 at age 7), and Nguyen Toan Thi, a war artist who was, until 2005, the director of the Ho Chi Minh City Fine Arts Museum.

Most of the featured artists were born in southern Vietnam, and a number of them served in the war of resistance to French rule (1946-1954)—the First Indochina War—as well as the American War. After the Geneva Accords divided Vietnam in 1954, they “regrouped” to the North, where they received training at the Hanoi School of Fine Arts; a few trained in the Soviet Union as well. As the United States escalated its military intervention to prevent the collapse of the government it had backed in South Vietnam since 1954, Hanoi began to send artists on the four-month trip down the Ho Chi Minh Trail to the southern “Front.” During the course of the American War, about 100 soldier-artists served with units of the People’s Liberation Armed Forces (the southern guerrillas known to Americans as the Viet Cong) and units of the People’s Army of Vietnam (the North Vietnamese army). Sixty-two of them died in the war.’