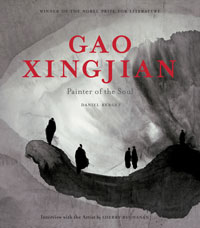 Painter of the Soul

Daniel Bergez is an award-winning art and literary critic, a professor of French literature and a painter. His books on he relationship between painting and literature are authorities in their field. He lives in Paris.

Illustrated in colour throughout

Universally known as the winner of the Nobel Prize for Literature in 2000 for his novel Soul Mountain, Gao Xingjian is also an artist whose paintings are exhibited worldwide. Born in China in 1940, the multitalented Gao excels equally as a critic, playwright and filmmaker. After his avant-garde plays were banned, he left China in 1987 and settled in France. Today he lives in Paris where he continues to paint and make films. This stunning book showcases for the first time over two decades of Gao Xingjian’s oeuvre. Daoism, the Chinese literati painting tradition and Western Modernism inform Gao Xingjian’s masterful ink-wash paintings. His groundbreaking technique allows him to work with ink, the traditional Chinese medium, on large canvases. A champion of a return to painting, he remains as free from the diktats of the contemporary art market as he did from the Communist censorship that led to his exile. Drawing from Soul Mountain and other literary works, author Daniel Bergez offers telling insights into Gao’s enigmatic landscapes and figures while Sherry Buchanan’s interview with the artist reveals the drive for innovation behind the artist’s unique pictorial creation.

‘A visually sumptuous read that is both erudite and approachable.’

Gao Xingjian is one of China’s greatest living writers and dramatists, a winner of the Nobel Prize for literature in 2000. He won acclaim with his novel Soul Mountain, a part-memoir, part novel detailing his travels among Chinese minorities on the fringes of the Han Chinese civilization.

‘The Nobel Prize-winning author Gao Xingjian is the subject of a new book which explores his half-century career as a visual artist…Shining a spotlight on his mastery of ink, Gao Xingjian: Painter of the Soul features a long essay by French literary and art critic Daniel Bergez (translated by Sherry Buchanan). Buchanan also conducted an interview with Gao, providing a personal touch to the tome. Bergez’ essay explores the notion of East-West in Gao’s work, his artistic and aesthetic philosophy, the relationship between his paintings and language, and the grammar of his techniques. The text is highly readable and enjoyable, allowing us to understand Gao’s thoughts and creative processes without intimidating us with the sort of art jargon that so often clouds the artist’s meaning.

Generously oversized, the book beautifully illustrates his work semi-chronologically from 1965 to 2011. Gao’s essays on art and literature are numerous, likewise there have been many others who write about his work. This book manages to merge the stories of his visual and literary creations into one pleasant art book making it perfect for anyone with an interest in recent ”ink art”, philosophy of art and aesthetics.’ Shane Suvikapakornkul, ‘Lyrical Ink,’ The Bangkok Post Magazine, 27 February 2014.

‘Novelist finds another medium of expression in ink and canvas.’ The South China Morning Post, 9 February 2014

‘Nobel Laureate Gao Xingjian is widely feted for his writings, but it is his ink-wash paintings that charmed Parisian art and literary critic Daniel Bergez. The book, Gao Xingjian: Painter of the Soul, offers a mesmerizing gallery of ink-wash works that illustrates the different techniques, themes and periods in Gao’s extensive body of work. The recently published book however is more than just a monochrome beauty. Bergez who is a professor of French literature at the prestigious Parisian Lycée Henri IV plumbed the depths of Gao’s works in brush and pen to surface profound harmony between his writings and paintings. The result: a visually sumptuous read that is erudite yet approachable.’ Huang Lijie, ‘Nobel Laureate Gao Xingjian’s dreamscapes charm Frenchman,’ The Straits Times, 24 December 2013